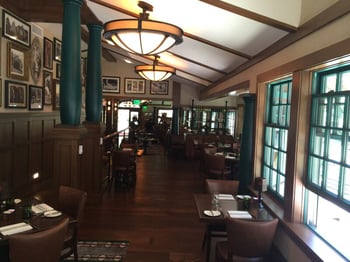 A full-service electrical contractor since 1921, Berwick Electric Co. has seen it all. From small wiring projects to large remodels, the aim of the company has always been to follow each project to completion using high performance standards, regardless of how challenging a job might seem.

This probably explains why the Berwick Electric crew was so excited to get the Seven Falls' Restaurant 1858 labor completed, despite the many challenges the location presented.

What Makes Restaurant 1858 So Unique

When it comes to complicated locations, Restaurant 1858 is definitely unique. Situated at the base of Colorado Springs' Cheyenne Canyon and surrounded by granite walls, the restaurant is located on complicated terrain and subject to severe and unexpected weather throughout the year.

This was apparent when Berwick Electric was contracted, in part, to restore damage done by a 2013 flood. The damage -- which included the waterfall lighting and accent lighting on surrounding trees and rock -- was just one part of a much larger project. Other things to tackle? Installation of additional power for mechanical equipment, holiday season lighting, and special fire and alarm controls for the restaurant itself. 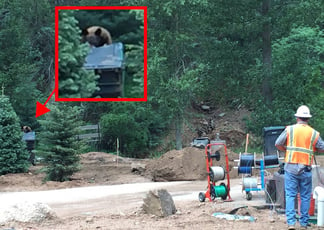 Aside from the difficult terrain and location, Berwick had to deal with two unexpected challenges: unseasonably cold weather and the occasional bear visit to the site. Midway through the project, a second flood damaged a lot of the work that had already been completed, which meant the crew had to work harder and faster to get things finished on time.

The original structure needed a lot of work before it could become the fine 5-star dining space everyone envisioned. Because of the restaurant's location, providing additional lighting meant that Berwick had to add wiring and piping to cut through the canyon. This provided a source of energy for the LED lights and fixtures being installed to illuminate the seven drops of the waterfall, the trout pond, the parking lot, and the assorted tree and rock formations surrounding the restaurant. There was also a special setup created for a Christmas light displays outside the restaurant, which required installation of power every 150 feet through the canyon.

Berwick’s team also installed light fixtures, as well as specialty lighting and control panels, power and heating in the Curio shop and the kitchen area of the restaurant. The same type of power and lighting installations were added to the remodeled restrooms, the caretaker's house, and the new food trailer. 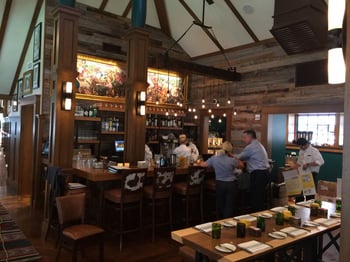 Colorado Spring's Seven Falls is a seven-tier waterfall located in the heart of Cheyenne Canyon. A favorite among hikers and nature lovers, the falls remained off limits for almost two years, since a massive flood in 2013 destroyed roads and closed attractions within the canyon.

Last year, the Broadmoor hotel and resort bought the popular old restaurant nesting just under the falls and embarked in a massive renovation of the place. When Seven Falls opened again in August 2015, after almost two years of silence, the brand new restaurant opened its doors as well.

Part of the massive renovation undertaking was to make sure the location had proper lighting to emphasize the beauty of the falls. In order to get this done, Broadmoor hired Berwick Electric, an electrical contractor that has been serving the Colorado Springs area since 1921.

Berwick – which had to deal with ill-timed cold weather, difficult terrain and even bear visits to the site while doing the renovation -- focused on the installation of specialty lighting and controls, as well as the wiring and piping needed to carry electricity through the 4,000-foot-long canyon. New lighting was not only provided to the inside of the restaurant, but also added to the parking lot, the curio shop, and new buildings like the restrooms and the food trailer.

What Makes the Restaurant So Special? 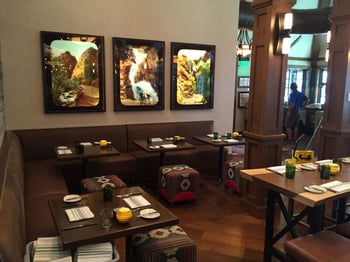 The renovated restaurant has been renamed 1858 in honor to the year that started the Gold Rush era in Colorado. To keep the old feeling intact, the renovation of the restaurant included the addition of chandeliers and lighting features that mimic mining lanterns, the construction of a 20-seating patio area, and a lot of touches to enhance the rustic wilderness feel of the building – including the use of reclaimed barn wood and hand-hewn stone. Old photographs depicting what the surrounding area looked like in the mid-19th century now hang on the walls.

The goal was always to make 1858 look like it's been part of the canyon for a century, and the new redesign accomplished that beautifully. To ensure an authentic feel, Berwick also worked on hidden light installations mounted underwater and under the stairs.

Preserving the Authentic Flavor of Times Gone By

When designing a new menu for the 1858 Restaurant, the new sous chef at 1858 focused on a high-end version of old frontier cuisine with touches of Creole and old European flavors.

Visitors to the restaurant can expect dishes featuring Rocky Mountain trout, bourbon honey lacquered pork loin (with a side of roasted apples), and many versions of grilled meats and vegetables – much of which will be cooked in the restaurant's 4-by-3-foot wood-burning grill.