BEC won the 2012 Outstanding Corporate Philanthropic Program Award from Partners in Philanthropy. Special Kids Special Families nominated BEC for the assistance provided with their relocation and the renovation of their North Avenue office facility. "Doug Berwick, Jim Peterson, and the employees at BEC designed and created our adult day program space around the needs of the adults with disabilities that we serve," SKSF Executive Director Linda Ellegard said. "We could not ask for a better facility."

Pikes Peak Area Crime Stoppers. Crime Stoppers is a local program that pays cash rewards for anonymous tips that lead to the arrest of suspects or wanted felons and the recovery of narcotics, stolen property and cash.

Doug Berwick is the past president of the Pikes Peak Area (Colorado Springs) Crime Stoppers. Berwick Electric is committed to keeping neighborhoods safe in Colorado Springs and surrounding areas, and we take an active part in the solution to these problems.

NOTICE: There is currently a $5,000 reward available for valuable information that leads to an arrest of the arsonist(s) responsible for the Waldo Canyon Fire in Colorado Springs. Click the STOP SIGN below for more information. Please call the number below if you have any information regarding this crime.

Congratulations on your bright future, Kaylee!

Defenders of Freedom Veterans Recognition Ride. The Defenders of Freedom Veterans Recognition Ride is dedicated to raising funds to assist our service men and women that have suffered severe injuries during their duties overseas. The ride also recognizes the major military bases in the Pikes Peak region - Schriever Air Force Base, Peterson Air Force Base, Fort Carson and the United States Air Force Academy.

This ride is "the longest law enforcement-escorted ride in Colorado". Participants embark on a 40-mile ride, and the proceeds from the 2014 event will benefit The Special Operations Warrior Foundation (SOFW). Registered riders receive pins, meet other riders & enjoy a great morning of riding.

Photos from past rides, including the 2013 ride

After serving as a past president of the YMCA of the Pikes Peak Region, Doug Berwick continues to sit on the foundation's board. Doug has also been an active volunteer over the last 25 years. 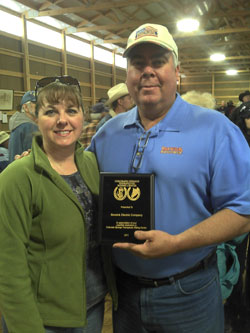 Thank you to the following Berwick Electric Co. Employees (current & former) who have donated their time to the completion of the Colorado Springs Therapeutic Riding Center:

YMCA of the Pikes Peak Region

BEC in the News