A Matter of Phases: Understanding How Commercial Voltages Work 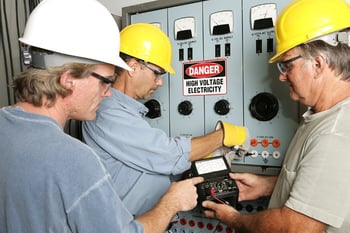 In the USA there are a number of standards and regulations that govern commercial and residential electric. These guidelines and regulations have been developed to ensure that power supply is as safe and reliable as possible, but it can be confusing to work out which type of power is which, and what the various terms mean. Here is a cheat sheet with explanations for commonly used terms.

AC power, or alternating current, is the term that describes a type of electrical power where the current changes direction frequently. Essentially, the current does not flow in one direction only, but rather, it doubles back on itself in cycles. Cycles are measured in Hertz. This is the type of power you will most commonly find in your building, and in the USA, it is most likely to be 60 Hertz.

DC power, which is what most batteries use, stands for direct current, or power that only flows in one direction.

Single-phase power, which is most commonly used in residential applications, is a type of electrical power where all of the voltages of the electricity vary in unison. In other words, all of the waves or cycles of the power occur simultaneously. If you drew them on a piece of paper, they would all be on top of each other, making a single line. In the USA, phases are often divided, resulting in what is known as split phase power.

Three-phase power, on the other hand, has each of the three phase cycles occurring sequentially, or after each other. Each one is out of sync with the other by one third of their cycle, and if you were to draw this pattern on a sheet of paper, you would have three distinct waves or cycles. Commercial and industrial power is normally three phase, and it is capable of powering much bigger, much more current hungry equipment stably and consistently.

Voltage is the difference in electrical potential between two points. It is measured using a voltmeter, and in most cases, all you need to know is how much voltage a particular installation or piece of equipment requires to operate.

Electric supply in the US is usually 120 or 230 for most residential applications. Most household plugs are designed for 120 volts.

In commercial and industrial applications, several different voltages are used, including 208, 240, 480 and 600 volts. The voltage required for a particular application will also vary according to the power requirements of the building or installation.