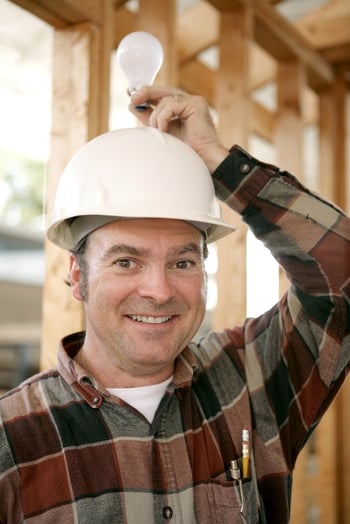 When Thomas Edison perfected the first commercially viable electric lightbulb in 1879, he probably had no idea that a couple of hundred years later, there would be so many variations on his idea. However, there have been many leaps and bounds in electric lighting since then, and there are hundreds of different types of lightbulb on the market today. Here is a brief outline of the most common types.

Incandescent bulbs are the closest to Edison’s original design, and they are the classic lightbulb that we all know. This bulb uses a tiny filament of the metal tungsten, super-heated until it glows, to create a soft, yellowish light. These lightbulbs are the cheapest to purchase, and offer between 700 and 1000 hours of light. They are not very energy efficient however, and in most cases, there are other options that are a better choice.

Fluorescent lightbulbs have been around for a long time too, and most people are probably familiar with their bright, ever so slightly greenish light, and the annoying flicker they make when they are not working properly! They provide what is known as daylight equivalent light, and they are cheap to purchase and run, which makes them a great choice for lighting large areas like offices and basements.

Halogen bulbs offer the closest to natural white light, and they can be incredibly bright. Which is why they are often used in floodlights, work lights and film studio lighting! They burn incredibly hot, and are not cheap to purchase, but offer better energy efficiency than incandescent lightbulbs.

CFL’s, or Compact Fluorescent bulbs, are one of the newer types of lightbulbs, and are known for their energy efficiency. They last up to ten times longer than incandescent, and can cut lighting power bills down greatly. These bulbs are available in a variety of strengths, colors and other options, and are great for residential or commercial applications where energy efficiency is important. They do, however, contain trace amounts of mercury, which means they need to be treated with care. They also need to be recycled carefully when they do eventually burn out.

LED lightbulbs are the new kids on the block, and they have come a long way over the past few years. These bulbs use a technology called “light emitting diodes” to create lighting that is extremely energy efficient with less heat build-up and much longer overall lamp life - up to 10 times longer than fluorescents and far longer than incandescents. LED light bulbs are initially more expensive, yet the cost is recovered over time by lowering your electrical and air conditioning costs.